Super Mario 64 is one of the earliest 3D platformers. Since the game utilizes the third dimension, the levels are designed to be less linear than Mario’s 2D entries. Many of the larger levels have multiple goals such as winning a race, getting all the red coins, or defeating a boss. The game rewards the player with a star for completing these challenges. Once the player obtains 60 (of 120) stars, they can face off against Bowser. Recently, I was replaying Mario 64 to attempt to get all 120 stars, and I started playing the level Tiny-Huge Island. Every time Mario slides down a pipe in Tiny-Huge Island, he changes size to either tiny or huge. While I was playing, I noticed some particularly clever game design when I got the fourth, fifth, and sixth stars of Tiny-Huge Island.

In the challenge to get the fourth star of Tiny-Huge Island, the player must find Five Itty Bitty Secrets. As the name suggests, there are five secrets hidden within the island, and Mario must be huge to find them. Since the fifth and sixth stars are concealed, this challenge is desinged to hint at their locations. By forcing the player to be big Mario, the designers made it much easier for the player to explore the island. Huge Mario can traverse the island much more quickly than tiny Mario. Although there are five secrets, only two of them show players where the next stars lie. The first secret is on a tiny out-of-place plank jutting from the wall.

The second sits at the island’s peak.

Once the player has found all five secrets, they can progress to the fifth challenge.

To obtain the fifth star, the player must locate Wiggler’s Red Coins. The player has thouroughly explored the level at this point, but they have not seen any obvious red coins. Since there are no conspicuous places left, the design guides the player to check the secrets they were shown in Five Itty Bitty Secrets. Because the player has already discovered the secrets as huge Mario, they will want to check the those same areas with tiny Mario instead. As small Mario, all the secrets—except the first one—are dead ends.

When the player checks out the first secret, they will find Wiggler’s Red Coins. 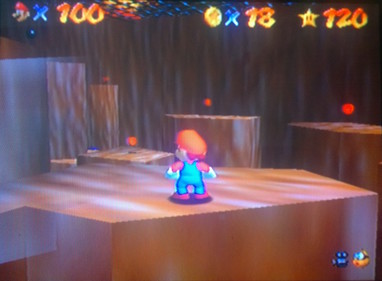 The challenge is still incomplete though. In order to finish it, the player must collect the coins. As the player gathers the coins, they will notice eye-catching movement in the mesh ceiling. 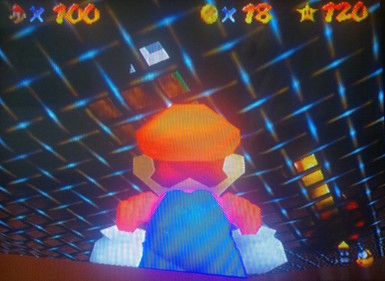 The challenge for the sixth star is to Make Wiggler Squirm. Because the player has seen the opening above the wriggler, they will know that the entrance is on the top of the mountain. Then the player may check the peak of the island as small Mario and find the entrance closed. The next logical step is to check the summit as big Mario. A ground pound will open the entrance.

Then the player must return to the peak with tiny Mario and drop into the hole.

Finally, the player must defeat wiggler to obtain the sixth star.

These three challenges integrate brilliantly. They trasition perfectly. They flow seemlessly. The levels guide the player but do not oversimplify the task. Teasing the player’s brain, the design encourages and rewards players for thinking about what they see. However, the design also limits the player’s options and helps them avoid getting too off course. The design attempts to keep the player in a flow state, and—for me at least—it succeeded.

The Brilliance of Mario's Size and Shape

Previous: The Mediocre Dinosaur (Spoi...
Next: Step Through Your Code